On Monday, students from Parkside Elementary heard from a special visitor: Parkside 4th grade teacher Mrs. Mary Brookins dressed as Ms. Frizzle (from The Magic School Bus) and taught in grades K, 1, 3, 4, and 5!  They made models of the eclipse with flashlights and balls – placing the moon between the earth and the sun to create a shadow, and they also watched a simulation video of what the eclipse would look like when viewed through their special glasses. 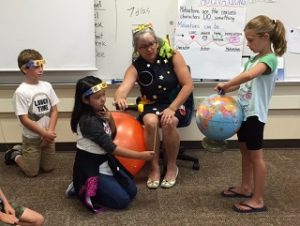 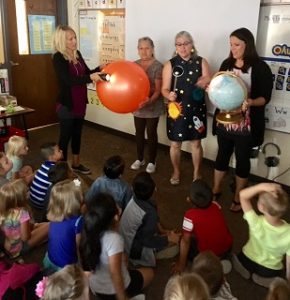 Parkside classes practiced with the glasses during lunch recess, and then they had viewing stations for each grade level during the eclipse.  Each station had a pinhole viewer and thermometer. The thermometer was used to measure the temperature during the time the sun was blocked, and the temperature dropped from 86 degrees down to 76 degrees at 2:23 (the point for the most blockage by the moon)! 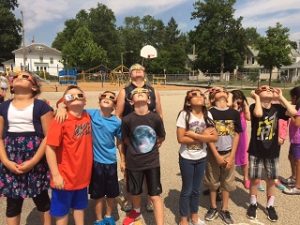 It was a great day for science lessons!