Mrs. Jane Troup, who has served on the Goshen Board of School Trustees for 23 years, was honored recently at the Indiana School Board Association (ISBA) conference, where she was awarded the Outstanding Boardmanship Award. 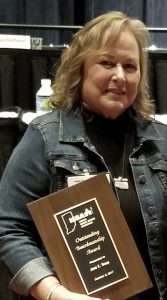 Mrs. Troup has served in many capacities on the GCS school board, including 1 year as treasurer, 11 years as secretary, 4 years as vice president, and 4 years as president. Along with her board roles, Mrs. Troup has served on many district committees as well, including the Athletic Council (10 years), Policy Committee (15 years), Facility Task Force (5 years), and the Legislative Committee (10 years). In addition to her many GCS roles, Mrs. Troup also served on the Indiana School Board Association Board of Directors from 2006-2013. She was the ISBA Regional Director from 2006-2009, and was elected as the ISBA President from 2011-2012.

In Mrs. Troup’s nomination for the award, she was also recognized as a leader in promoting positive changes within Goshen Community Schools. She helped to establish and sustain the district Athletic Council during a time when the community and the district were interested in upgrading athletics and athletic facilities. She served on the Goshen High School Dollars for Scholars board, helping to raise funds and distribute many thousands of dollars in scholarships to Goshen High School seniors. Mrs. Troup was also recognized for her positive board behavior in the community, for encouraging the district to hold community meetings, and for organizing a variety of task forces over the years to encourage community involvement and two-way communication between the district and the community.

Mrs. Troup has volunteered many hours to GCS beyond her duties as a board member. She was part of a group that advocated for the bike path to the middle school, she served on the PTO, she helped build many musical and theater sets, and she has attended thousands of GCS athletic events and music programs, long after her own children were grown and gone from the school system.

For 23 years, Mrs. Troup has been instrumental in developing the long range plans for Goshen schools, including four major building projects. She is, and always has been, a key board leader who is plugged in to the community, and is open to listening to many different voices and opinions. She has been an exemplary board member; modeling for others what the proper board protocols are for any situation.

Mrs. Troup’s contributions and achievements in ISBA/NSBA (National School Board Association) include:

ISBA President, 2011-2012 (rotated through previous chairs to attain that seat)

Served on the NSBA Nominating Committee

Mrs. Troup has made many contributions to Goshen Community Schools over the years and she brings a wealth of knowledge to board discussions. GCS appreciates her continued willingness to read, research, and learn more about education in order to advocate for students and staff members, and to commit herself to the bi-monthly board meetings for so many years!