GHS has a new head volleyball coach this year in Mike Howard, who was approved at a school board meeting on April 23, 2018. 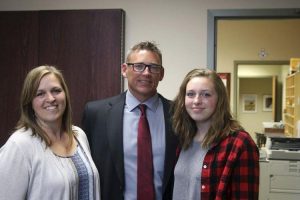 Below are sections from the Goshen News interview on the date of Mr. Howard’s GCS appointment:

Howard feels two elements are key to taking the GHS program to a higher level. “Hard work and a participation fever for the sport from the elementary schools to the middle school to the high school,” the coach said. “Success feeds upon success, but only if in the level of participation rises. We need to be aware of social-economic situations and make sure we give kids that can’t afford to play for an elite travel team the chance to participate in our program.”

Due to his time at Warsaw, Howard feels comfortable stepping back into the NLC and its high-level of competition. He mentioned league teams like Memorial, Concord and NorthWood.

“There are some very good programs in the NLC,” he said. “Plymouth has some fine young athletes and could be one of the better teams over the next couple of seasons.”

The new coach felt it was too early to talk about any changes in the GHS program. “We want to keep what is good,” Howard said. “One of the things that sold me on coming to Goshen was administration members like Barry Younghans (Goshen Principal) and Larry Kissinger (GHS Athletic Director). Both of them have an excitement for young athletes.”

With Coach Howard’s permission, we observed a GHS volleyball practice to get more of a sense of how he runs his program. The following are observations from that practice and from attending volleyball games throughout the coach’s first season at GHS.

When the volleyball players entered the gym for practice, they began going through some stretches and warm-ups on their own, seemingly knowing what was expected of them in order to be prepared for practice. 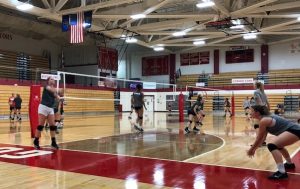 One of the first drills they did as a team was a scrimmage drill. They started with the score at 20-20 and played to the end of the game (in volleyball, of course, the winner has to win by two points). The losing side had to run lines. We noted that while the losing side ran lines, the other side stood, watched, clapped, and encouraged the ones running lines. Later, the coach explained that he will also stop the “end-of-the-game” drill and make the girls run lines if they simply let a ball drop because they are not communicating, don’t give a good effort, or don’t pursue the ball. 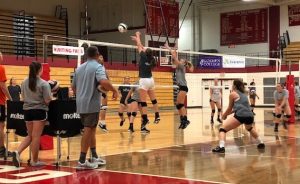 The assistant coaches used an iPad to videotape the student-athletes as they worked on drills, serving, spiking, etc… The coaches then either pulled individuals aside or gathered the whole team together to watch the video; showing them what they did wrong, or explaining their body mechanics when they did it correctly. The use of the video provided an instant, visual way to provide feedback to the players. 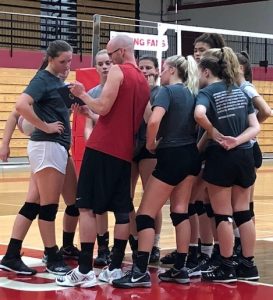 Another interesting observation was that the assistant coaches were participating in drills/scrimmages with the girls; spiking right at them, serving, and blocking the players’ spike attempts. When asked why the assistant coaches participate the way they do, Coach Howard said, “We don’t have enough depth.  And, we need the coaches to play at times because they better replicate things we will see from other teams, like Warsaw for example.” You can see in the picture below that one assistant coach is standing on a box to spike balls at the JV team. 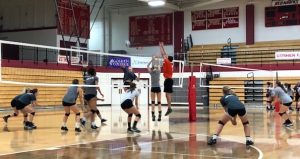 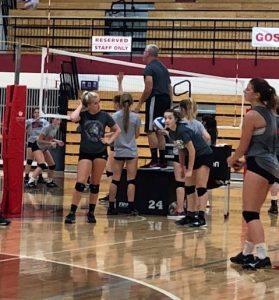 At one point during the practice, the coach pulled the varsity players together to talk to them. Among the things he said to them: “What is your goal for this week? What is you goal for this season?…We need more leadership, and more accountability. I know what my plan is, but I don’t know how important it is to you….If you don’t know what I expect or how to do something, ask…We’ve been drifting through sets instead of playing with intensity. If I have to intervene as a coach regarding intensity, that is never a good thing. It has to come from you…If you want to be on the court, you need to serve the best, hit the hardest, and have the best energy. And I need to see it in practice to put you on the court in the game.” (The coach later said that his talk with the varsity “was in response to having to ask two girls to leave practice a few minutes early the night before. We needed to talk about that”.) 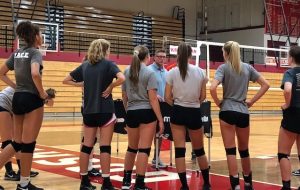 During some of the drills, several of the girls were playing with bean bags sitting on the back of their neck/shoulders. When asked why only a few of the players were using the bean bags, the coach said “It is used mostly by need or by position. A couple of the girls have trouble staying in posture. The bags provide feedback by falling off when you come up out of posture.”

Another observation of the practice: The volleyball managers are pretty much always in motion, gathering up balls to put in the ball carts and then returning the carts to the coaches. Nice job, managers! 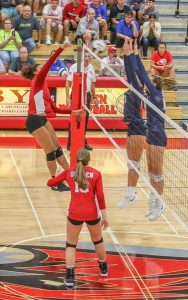 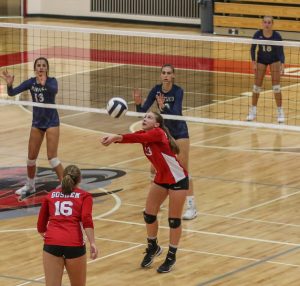 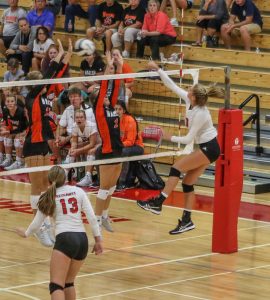 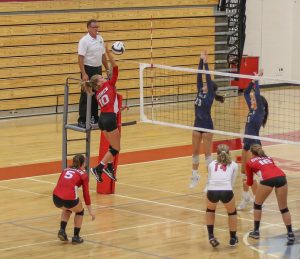 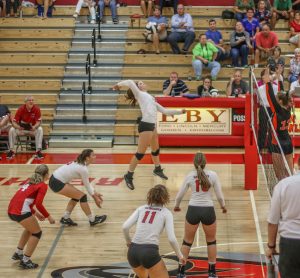 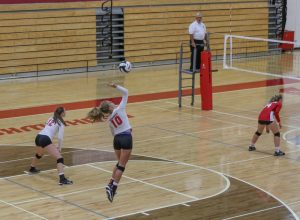 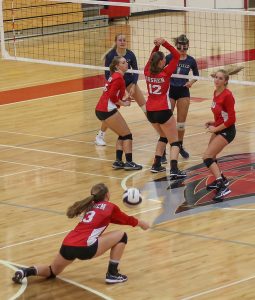 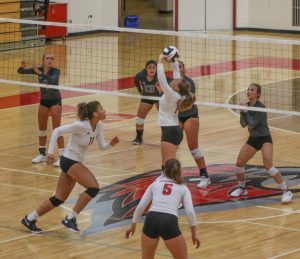 Mike Howard’s first GHS varsity volleyball team has just two seniors, meaning that he has a couple more years to work with some young, talented athletes. The players have also had some time to learn the coach’s expectations and to understand their individual roles on the team. Fortunately, they still have plenty of time left to represent GHS and their coach. We believe that there are some good years ahead for the RedHawk volleyball program, and we invite you to stay tuned as they continue to grow and improve! 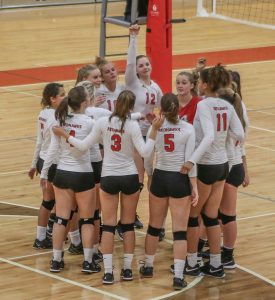 The varsity will take on Warsaw in sectional action on Thursday, Oct. 11 at Elkhart Memorial. The game will be played at 6:00 p.m. We hope to see you there!